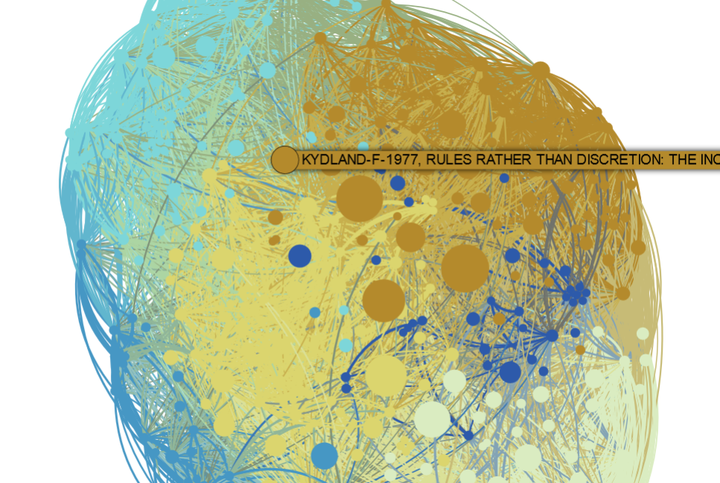 Bibliometric networks are an interesting tool to study the evolution of a disciplinary field or of a topic. A bibliographic coupling network, by looking at the references shared by a corpus of documents, allows us to understand the intellectual structure of a field at a certain point of time. A bibliographic co-citation network, by looking at the number of times the references cited by a corpus are cited together, reveals the main influences of a field.1

That is the two main tools I have used in my article “From the Stagflation to the Great Inflation: explaining the US economy of the 1970s” (Goutsmedt 2021). I analysed the way economists explained the US stagflation of the 1970s (a period of high unemployment and inflation) over time. Bibliometric networks completed a qualitative reading of the relevant articles and books and helped me to underline how we went from an explanation focusing on the effects of external shocks (the end of Bretton Woods and commodity-price shocks) on growth and unemployment, in the late 1970s and early 1980s, to an explanation that focused on the Federal Reserve mistakes and the effects of monetary policy on inflation.2

However, publishing academic articles with such tools often comes with some frustration. If bibliometric networks are helpful to prove your point and to display some of your results, they are also (and I am tempted to say “above all”) an “exploratory” tool that comes upstream of a project, well before having a clear idea of what you want to demonstrate.3 You can spend some time exploring your network, studying which nodes are in which communities, studying the effects of changing some parameters (in your partitioning algorithm for instance). But at the end of the day, what you will have in your paper is this:

Even if visually informative, the picture is an attempt of summarising all the information obtained by studying the network. And of course, it heavily relies on the explanations and interpretations given by its author, as it remains very hard for an external observer to understand what it is all about. Moreover, this observer is likely to experience frustration too, as she is unable to explore the network herself and depends on the visual choices made by the author.

The rationale behind this post is to evacuate a part of this frustration. I wanted to do several things here:

Before to go further, let’s charge some packages that will be useful for what follows:

Building a database of stagflation explanations

The first step in my article on stagflation was to decide what could be regarded as an explanation of the US stagflation and to identify the academic articles, books and book chapters responding positively to the criteria (see Goutsmedt 2021 for the whole list of criteria). I decided to focus on documents that devoted sufficient space to deal explicitly with the explanation of the phenomena.

To identify the corresponding documents, I relied on two methods:

I ended up with 174 documents (articles in academic journals, working papers, books and book chapters). 104 were in the WoS database. I thus could extract the references cited by these articles (yes, that’s almost only academic articles that you find in WoS). The process for the 70 remaining documents was more time-consuming. I parsed the bibliography of these documents in anystyle and cleaned the results. Then, I had to match these new references with what I got first with WoS. I eventually ended up with 572 references cited at least twice by the 174 documents on the US stagflation. 91 stagflation documents were also part of the 572 references—meaning that 83 articles and books on stagflation were either not cited or only once by other articles or books on stagflation.

Here is all the stagflation documents and all the references cited at least twice by these documents:5

If we look at the number of documents on stagflation per year, we see that there were two waves of interest for this topic: 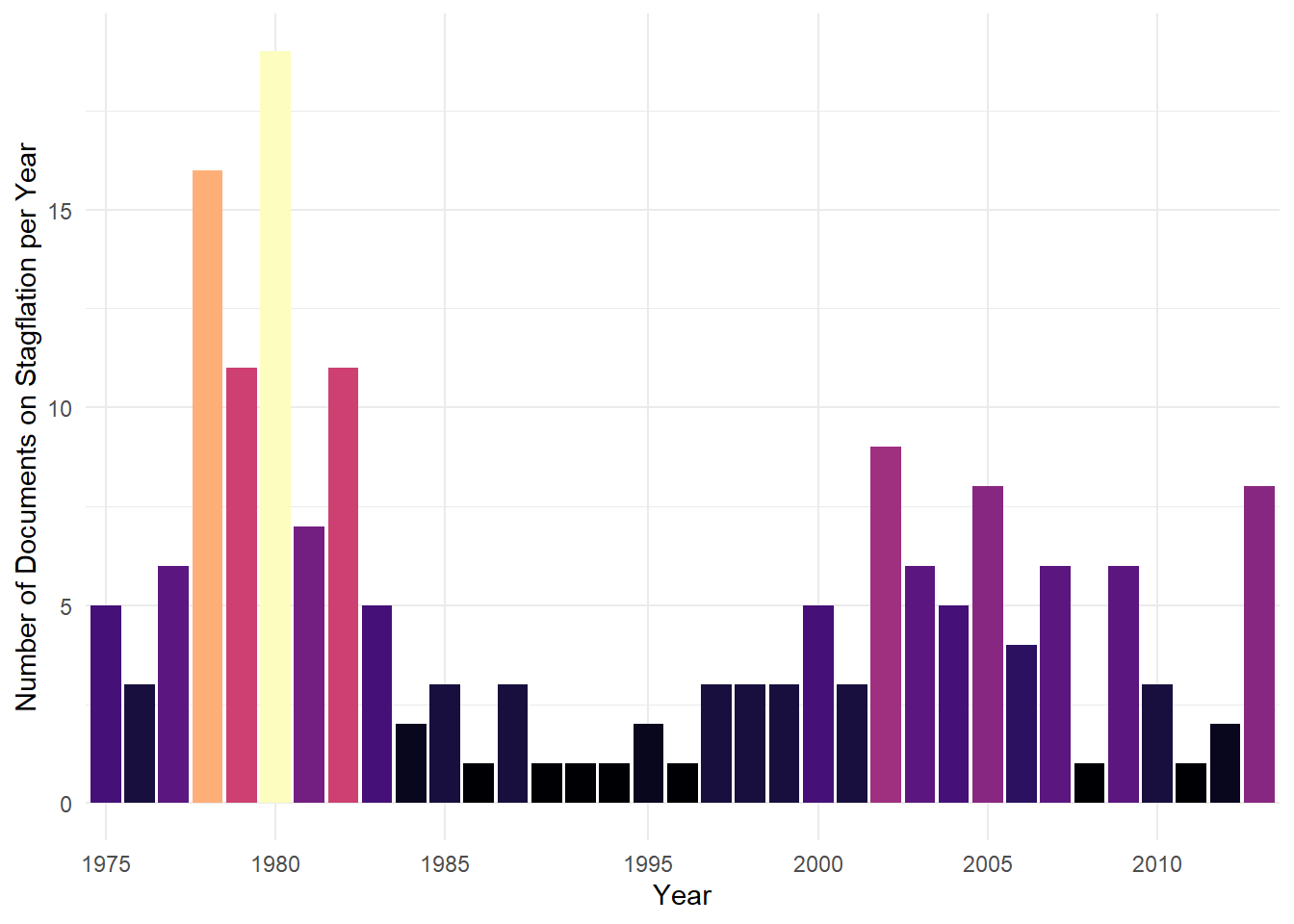 For each sub-period, I build a coupling and a co-citation network. The biblionetwork package, with the biblio_coupling() function, allows us to build the edges of the network, from a direct citation data frame (what each stagflation document cites), and to calculate a weight for these edges. The method for calculating the weights takes into account the size of the bibliography of each document. The biblio_cocitation() function does the same for the co-citation edges and the weights measure takes into account the total number of citations of each reference.6

The networkflow package offers functions wrapped around other packages, to simplify the analysis of networks and their projections. For creating and manipulating the network, I use the tidygraph package, which wraps the functionnalities of the classic igraph package in a tidy format. I use the Leiden algorithm (Traag, Waltman, and van Eck 2019) to find communities—groups of nodes highly connected together—in the four networks. For structuring the network in a two-dimensional space, I use the Force Atlas 2 (FA2) layout (Jacomy et al. 2014). FA2 is a force-based layout: basically, connected nodes are attracted together, and the layout minimises edges crossing. For community colors, I use the scico package (Pedersen and Crameri 2020) which brings palettes taking into account colour blindness issues.

In what follows, I use a loop with conditions, to build the four networks and prepare their projection:

In my article, I use the ggraph package to project the networks. Here, I resort to the sigmajs package (Coene 2020) for building interactive graphs. It relies on the Sigma javascript library, which is also used for the software GEPHI.

A more detailed analysis could be find in my article, but the major results to highlight are:

For the co-citation network, we can observe that:

In the second sub-period, we can see that:

When we look at co-citation, we see that:

These four graphs reveal a similar story: the methodological battles of the 1970s made marginal apparitions in the contributions explaining the US stagflation in the 1970s and early 1980s. Supply-shocks and inflation inertia were seen as the major mechanisms underlying the stagflation and the minority which proposed alternative explanations was forced to deal also with the supply-shocks explanation. After 1997, stagflation explanations largely differed from the 1970s and 1980s, and focused on the role played by the monetary policy of the Fed, questioning the role of distorting political pressure, bad economic ideas, bad policies and inappropriate institutional settings. The path-breaking contributions that stimulated methodological debates in macroeconomics in the 1970s, and which were mostly ignored in the stagflation literature at the time, were now central references.7

Another package for building interactive networks

By way of conclusion, I would like to write some words on the building of interactive networks. The sigmajs package is great as it allows R users to resort to Sigma Javascript library, which is a really great tool for network visualisations. With very few manipulations, you can build an interactive graph with interesting features (displaying labels and seeing connected nodes when clicking on one node). However, it offers only limited possibilities, in comparisons to ggraph for instance, to change the visual features of your graph (for instance, putting a border line around each node, having a long label on several lines or changing edges and nodes opacity).

Consequently, I have also tried the ggiraph package (Gohel and Skintzos 2020), which relies on ggplot2. It allows me to do something similar to the ggraph visualisations of my article. It is more flexible, notably for the label. But the zoom function appears less fluid, and above all I was unable to reproduce sigmajs feature when clicking on the nodes.8

Goutsmedt, Aurélien. 2021. “From the Stagflation to the Great Inflation: Explaining the US Economy of the 1970s.” Revue d’Economie Politique Forthcoming. https://aurelien-goutsmedt.com/media/pdf/stagflation-great-inflation.pdf. 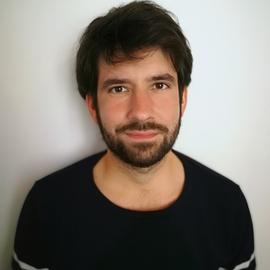